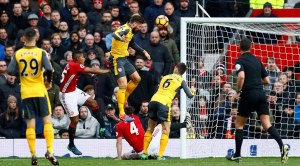 After a scoreless first half Man U scored in the 84th minute off a strike by Juan Matta. The Gunners responded with a late strike in the 89th minute when Olivier Giroud nailed a bomb of a header to make it one all.

Both the Red Devils and Arsenal tied one all. The tie kept Man U in touch with the leader board. A loss would have killed Man U’s season.

The tie on the other hand puts my Gunners title hopes in jeopardy.

Man U has 19 points while Arsenal has 25 big ones.

United dominated for long periods of the match and looked destined for a home win after Juan Mata had given them the lead with a 68th-minute strike.

But with only two minutes remaining of normal time two substitutes made the difference for the visitors, as Alex Oxlade-Chamberlain hared down the right wing and delivered a cross which Giroud powered past David De Gea.

Petr Cech was at full stretch to deny Mata, on 36 minutes, and twice thwarted Anthony Martial before the interval, but the hosts were worthy of their lead when Ander Herrera cut the ball back from the byline for Mata to fire low past Cech.

Marcos Rojo might have made it 2-0 when he headed Daley Blind’s cross wide of the goal but Arsenal’s first goal against a Mourinho side for nine years in the Premier League, ensured the Gunners escaped with a point.”