Brasil defeated Paraguay 3-0 to become the first club to qualify for the World Cup. Way to go garoto.

Victory over Paraguay on Tuesday was the new head coach’s eighth in a row in qualification matches with Brazil, and ninth in a row overall. And it means Brazil become the first side to qualify for the World Cup in Russia next summer after Peru beat third place Uruguay.

Philippe Coutinho, Neymar and Marcelo scored the goals but even the 3-0 scoreline flattered the visitors, who spent long periods under the cosh and saw goalkeeper Antony Silva save a second-half penalty. 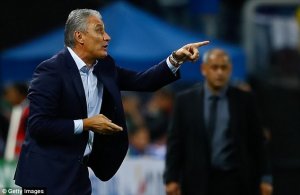 This, as has been the case with many of their matches of late, was made to look effortlessly easy.

The hosts dominated the encounter from the off but took until the 35th minute of the game to find a route in front.

It came through Philippe Coutinho – the nimble-footed Liverpool forward who has been heavily linked with a switch to Barcelona this summer.

Coutinho exchanged passes with Paulinho 20 yards from goal and picked out the bottom corner at the end of a rapid Brazilian counter-attack.

The Selecao were on course for a comfortable victory. 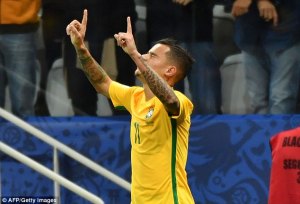 And any lingering doubts – as if such things existed – should have been wiped away seven minutes into the second half.

Neymar danced around half of the Paraguayan defence before being upended in the box by Rodrigo Rojas but his subsequent penalty gave Silva a chance and the visiting goalkeeper got down well to his right to make the save.

The Barcelona forward made amends 12 minutes later, however.

Finding space to get a shot away from within a melee of bodies in the Paraguay box, Neymar benefited from a deflection which wrong-footed Silva.

Neymar had the ball in the back of the net again before the end of the match, though the flag had been already raised for offside, while Brazil had other chances to add further gloss to the scoreline before Marcelo wrote his name onto the scoresheet.

The Real Madrid full back found the ball at his feet 12 yards from goal and dinked a tidy finish over the onrushing Silva.

It capped off a performance of some style.

The five-time world champions are showing they are a force to be reckoned with once more. 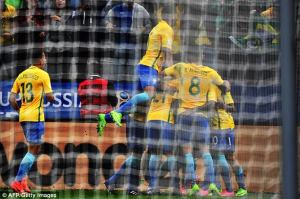