After the huge win in the Europa League Man U suffered some major injuries that could hurt their chances to catapult into the top four.

Man U and Burnley have a hot date later today.

The Daily Mail. “Manchester United and Zlatan Ibrahimovic have been dealt a massive blow after the striker was ruled out for the rest of the season after suffering a gruesome knee injury in the Europa League victory against Anderlecht.

The Swedish striker landed awkwardly on his right leg after attempting to win a header right at the end of normal time on Thursday night as United searched for a winner to send them through to the semi-finals.

The 35-year-old hobbled off the pitch and down the Old Trafford tunnel to be replaced by Anthony Martial at the beginning of extra-time. 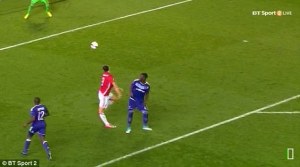 The injury news will come as a massive blow to United’s top four and Europa League hopes as the Swede has been instrumental for the club this season.

Ibrahimovic has scored 28 goals and produced nine assists for Jose Mourinho’s side in 41 matches this campaign.

And the former Paris Saint-Germain and Barcelona striker wasn’t the only United player to pick up an injury on Thursday.

Marcos Rojo also suffered a knee injury during the opening period and was carried off on a stretcher.

The two injuries and having to play extra-time on Thursday has left Mourinho with a huge selection dilemma ahead of Sunday’s Premier League trip to Burnley. 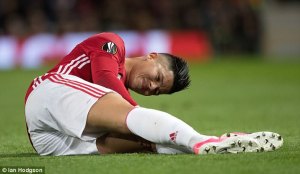 We are in trouble,’ said Mourinho. ‘In this moment, Eric Bailly played six matches in a row, and we lost Marcos Rojo. We don’t have Jones or Smalling.

‘We are in trouble and now we lose Zlatan too, but in attack, we have options and Rooney is coming, and let’s see if (Juan) Mata can also return before the end of the season. Let’s see what happens.

Mourinho will be hoping his United side can cope despite the number of injuries piling up as the club face a defining moment in their season. 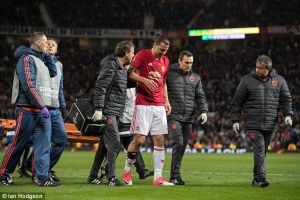 The Old Trafford outfit are currently fifth in the Premier League, four points off fourth-placed Manchester City, with a match in hand.

Furthermore, they were drawn against Celta Vigo in the semi-finals of the Europa League on Friday afternoon. 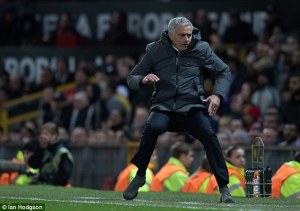