Man U and Celtic Vigo tied one all at Old Trafford in the second leg so the Red Devils advance to the Europa League final 2-1 on aggregate to advance to the finals. 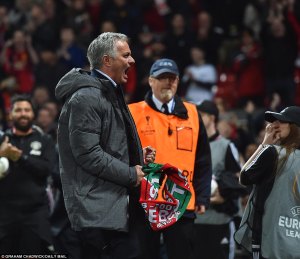 The Guardians Paul Wilson wrote: “t is probably typical of José Mourinho, arguably the most prolific trophy-getter in the business, that his riposte to Roy Keane’s observation that Manchester United’s first season under new management had been an “embarrassment” should involve confirming a place in another of the game’s showpiece events. Yes, it is not the European final a club with United’s ambitions crave but it still feels like a return to better days and, post-Ferguson, that made this one of the happier occasions since Mourinho took over.

He certainly seemed invigorated as he stood in front of the Stretford End, pumping his fists, and no doubt there was a measure of relief in that celebration bearing in mind an extraordinary finale in which Eric Bailly was sent off with Celta’s goal-scorer, Facundo Roncaglia, and the nerve-shredding moment six minutes into stoppage time when La Liga’s 12th-placed side had a golden chance to turn the night upside down.

A second goal at that stage would have eliminated United but the substitute Claudio Beauvue decided to pass when he would have been better advised to shoot and John Guidetti, once of Manchester City, was not decisive enough when the ball arrived at his feet. It was the last touch of the night and, at the final whistle, the two players looked in need of smelling salts while various team-mates dropped to the floor. For United it was a moment when their season had threatened to unravel.

Instead they will play Ajax at the Friends Arena, Stockholm, a week on Wednesday and Mourinho will get the chance to improve on his record of winning 11 out of 13 finals, as well as never having lost one in 90 minutes. He has already won the League Cup and another triumph will mean two trophies in his first season. United’s sixth position in the Premier League might be a legitimate point of criticism – but that would be as many trophies as Liverpool and Tottenham have managed in the last decade.

The only downside for United is that they will have to do without Eric Bailly because of the late flare-up that created enough bad feeling that the two red-carded players seemed willing to carry on the argument as they made their way off. In a strange sense the mêlée helped United because it came at the time when Celta were sensing the game might yet lurch in their favour. Antonio Valencia was probably lucky the Romanian referee, Ovidio Hategan, missed the shove that persuaded Guidetti to hit the floor. Bailly also gave the Swede a little swipe before Roncaglia charged in, shoving Paul Pogba and shaping to take on anyone in red who came too close. Bailly had to be restrained by Marouane Fellaini, which is never a good look, and that loss of temper might have had serious repercussions if United’s patched-up defence had conceded again at the end.

Eduardo Berizzo, the Celta coach, talked later about his side “playing as we dreamed” and they certainly made it easier to understand why they have scored in each of their seven away ties. Berizzo’s team looked more threatening than in any part of the first leg and can reflect on a number of other chances. Guidetti, in particular, should have done better with a headed opportunity with a quarter of an hour to go. Roncaglia equalised on 85 minutes with a header of his own and it must have been unnerving for the home crowd that, even when their team had a 2-0 aggregate lead, they could not subdue their opponents.

It was certainly reasonable to expect a more straightforward night for United once Fellaini’s 17th-minute goal soothed the crowd’s early nerves. Fellaini, a player who has been booed on this ground more times than he would wish to remember, was serenaded from all four stands before half-time. Pogba could be seen ball-juggling in midfield and Marcus Rashford showed again that he is an ideal wearer of United’s colours. “Football taught by Matt Busby‚” the song goes – and Rashford fits in neatly with his speed, penetration and youthful exuberance. His finishing may still be raw sometimes, with other moments of carelessness in the second half, but the 19-year-old has responded impressively to the extra responsibility placed on him now Zlatan Ibrahimovic is unavailable and it was an expertly delivered cross for Fellaini’s headed goal.

Mourinho acknowledged Celta “were better than us”. Iago Aspas, barely recognisable from his unsatisfactory time at Liverpool, was a difficult opponent and Sergio Romero, deputising for David de Gea, was the busier goalkeeper by some distance. Yet this was also another night when United displayed their powers of endurance and it leaves Mourinho with the chance to end his first season on a high.