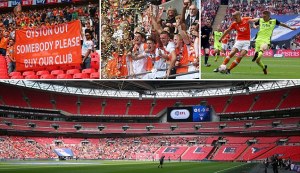 Blackpool defeated Exeter 2-1 to get promoted to League One.

The Guardians John Ashdown wrote;” Blackpool bounced back to League One at the first time of asking with victory over Exeter City in the League Two play-off final at Wembley, with Mark Cullen poking home the winner midway through the second half to spark joyous scenes in the Tangerine half of the stadium. Well, a corner of it anyway.

That so few Blackpool fans – little more than 5,000 – were here to witness what should have been a celebratory occasion is testament to the depth of resentment against the Oyston family’s ownership of the club. This result will prompt mixed feelings for those on the Fylde coast who fear a victory for the team is a victory for the regime.

On their last trip to the national stadium, for the Championship play-off final in 2012, more than 30,000 Blackpool fans were in attendance. Two years earlier, around 37,000 made the trip south to see Ian Holloway’s side reach the Premier League. This time around, one end of Wembley cut a sorry sight, with little more than a third of the bottom tier occupied. The Blackpool Supporters’ Trust’s boycott that has been in effect at Bloomfield Road all season made for a startling sight in the grander surrounds of Wembley.

“It’s shame because we would have been great to have more here,” said the Blackpool manager, Gary Bowyer, who knows something about unpopular owners from his time working under the Venky’s regime at Blackburn Rovers. “But on the first day that I walked into the club I said that we couldn’t control it. I was used to that situation at Blackburn, where fans were unhappy with the owners, so I used the experience from that time and just concentrated on what we can affect, which is the football.”

Other than League One football, what the future holds for Blackpool remains unclear, though the next chapter is likely to be written this summer when the club president, Valeri Belokon, and the Oystons take their multimillion-pound legal battle to the high court. No end to the conflict is in sight, though, and the boycotts seem certain to continue at Bloomfield Road next season.

Though off the field the club is riven with division, the same could not be said for those on the pitch. Despite having lost their captain, Tom Aldred, to injury midway through the first half and seen Exeter dominate before the break, it was a spell of Blackpool pressure that resulted in David Wheeler cancelling out Brad Potts’s early opening goal. Bowyer’s side rallied to establish themselves as the better side in the second period and Cullen’s winner was by no means undeserved. “It’s unbelievable, said Bowyer. “It’s an amazing feeling and it’ll stay with the players for a long, long time.”

While Blackpool’s joy was tempered by their ownership issues, in the despair of defeat Exeter’s supporters could take solace the fact their club is in the hands of the fans and has been since 2003. They can also look forward to next season with optimism having enjoyed a remarkable resurgence since the autumn.

“I’ve lost here before and won here before so I know both sides of the coin,” said the manager Paul Tisdale, whose injury-plagued side were bottom of the Football League in mid-November. “When you lose you feel a little bit cold to emotion. Immediately your mind turns to next season and what you need to do. It hurts but you don’t have that release of emotion that you get when you win. We’ll have a couple of weeks to let it settle then start getting ready for next year.”

Both these sides were on the right end of 6-5 aggregate scorelines in the semi-finals (and both were the beneficiaries of 95th-minute winners) so goals were to be expected and those in Tangerine who did buck the boycott saw their side take the lead after just 130 seconds. Cullen beautifully created it with a fine touch and a smart pass inside, and the onrushing Potts swept past Christy Pym in the Exeter goal.

Exeter responded in calm, controlled fashion and were almost back on terms within 10 minutes, only for Sam Slocombe to brilliantly deny Ollie Watkins. Instead they had to wait for the equaliser, which eventually came five minutes before the break. Craig Woodman’s quick free-kick from deep caught out the Blackpool defence, by now shorn of the injured Aldred, and Wheeler cleverly lobbed the stranded Slocombe. 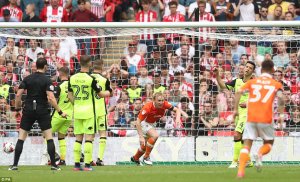 City had dominated the first half but the interval broke their momentum. They had barely escaped their own half in 20 second-half minutes when Potts stormed into the penalty area and scuffed his shot across goal. Pym’s faint touch was enough to divert the ball into the path of Cullen who poked home with little more than his studs.” 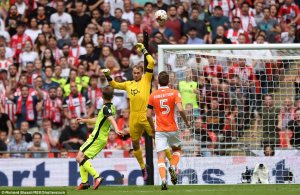