The Guardians Daniel Taylor wrote:” It ended, as it so often does, with that familiar smile. Cristiano Ronaldo – gelled hair, dazzling teeth, magic in his boots – will never forget the night he scored the 600th goal of an almost implausible career.

It was the moment everyone knew the Champions League trophy was on its way back to the Bernabéu and, once again, that the four-times Ballon d’Or winner had left his imprint on another final.

Ronaldo had scored twice on another exultant night when he also leapfrogged Lionel Messi to announce himself as the competition’s leading scorer for the fifth season running. He will enjoy that, too, but the real prize here was to be part of a side that have now lifted European football’s most coveted silverware three times in four seasons. Cardiff 2017 will fit neatly with Milan 2016 and Lisbon 2014whereas, for Juventus, this was a familiar story of regret and hurt.

This was their seventh defeat out of nine finals, including five in a row, and the second half was a chastening experience for the Serie A champions, culminating in them sieving more goals in one match than in the rest of the competition put together. It was a full-on collapse and, by the end, the players in black and white stripes looked in need of smelling salts.

It was certainly rare to see a Juventus team lose their way so badly bearing in mind it was 1-1 at the break and, if anything, Massimiliano Allegri’s players had looked the more rounded side. Yet the second half was a dreadful ordeal for the team from Turin and all those supporters who had held up thousands of black and white cards before kick-off to spell: “The Time is Now.” Yes, Juve were unfortunate, in the extreme, with the deflected goal from Casemiro that gave Madrid a 2-1 lead just after the hour. From that point onwards, however, it was staggering to see a team renowned for defensive structure crumple this way. 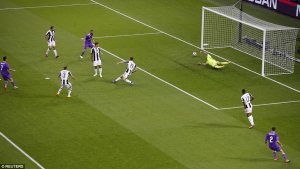 Juve’s indignities in that period also featured a sending-off for Juan Cuadrado, one of their substitutes, and a late goal from Marco Asensio when the thousands of Madridistas were already going through their victory songs. Gareth Bale, deemed too short of fitness to start, had joined the party by that stage and no one from Zinedine Zidane’s team should really care that the game’s outstanding moment was conjured up by one of the losing players.

Mario Mandzukic’s goal was the paradox of the night. Indeed, has there ever been a better goal in a European final? Zidane himself is on the all-time list for his spearing volley against Bayer Leverkusen at Hampden Park in 2002. Yet it is a legitimate debate and Mandzukic’s 27th-minute effort here might even edge it given that it involved the ball going between four different players without touching the floor.

Leonardo Bonucci was first with a long, diagonal pass out to Alex Sandro on the left and, after that, it was a blur of exhilarating speed, colour and movement. Sandro’s cross to pick out Gonzalo Higuaín was a beauty: a cushioned, left-footed volley on the run. Higuaín controlled the ball on his chest and flicked it towards Mandzukic. And then, finally, it was the big man’s turn, teeing himself up and then twisting his body to launch himself at the ball. Volley, chest-volley, chest-volley: five touches in total, mid-air; left, right, left and right again. It was like something from a computer game and, at the end of it, Mandzukic’s improvisational shot was dipping and swerving into the top corner of Keylor Navas’s goal. 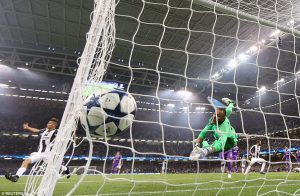 Ultimately, though, the more prosaic goals carried the greater significance in this contest. Madrid have managed only one clean sheet on their way to winning this competition. Yet there is another statistic about Zidane’s team and the player, more than anyone, who carries the team’s dreams. They arrived in Cardiff with the best goals record of any side in the competition – 32 from 12 ties – and Ronaldo, being Ronaldo, rarely lets a big game pass him by without making some kind of contribution.

To begin with, he had found it difficult to get too much of the ball in and around the Juve penalty area. But he also had periods in the other finals when he drifted to the edges. Then this one reached its 20th minute and he came alive, exchanging passes with the overlapping Dani Carvajal before pulling back his right boot to take aim. His shot was low, directed towards the bottom corner, and skimmed off Bonucci to elude Gianluigi Buffon. 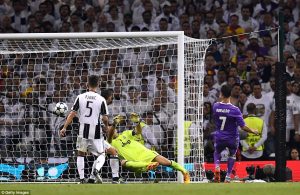 If we were to be kind about the losing side, Madrid’s first two goals both came from deflections and, in Casemiro’s case, the trajectory of his shot completely changed once the ball had struck Sami Khedira. The truth, however, is that Juve, having conceded only three goals en route to this final, chose a bad night to lose their defensive organisation and never recovered from that moment.

Three minutes later, Luka Modric scampered down the right, clipped a cross to the near post and Ronaldo’s clipped finish gave the remainder of the match an air of inevitability. “The people who always criticise Cristiano are going to have put their guitar back in its case,” he said afterwards, modest as ever. 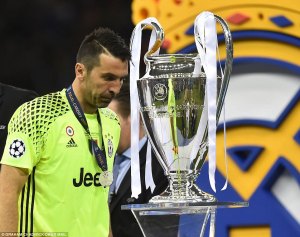 There was still time for Sergio Ramos, as devious as a bag of weasels, to help engineer Cuadrado’s second yellow card with a bout of pretend agony but Madrid’s second-half performance had a lot more good than bad. Marcelo set up Asensio to sweep in their fourth goal in the last minute and Zidane joined Brian Clough, Sir Alex Ferguson, Pep Guardiola and José Mourinho among others on the list of managers who have won the European Cup twice.” 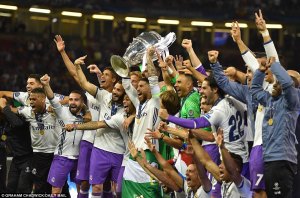