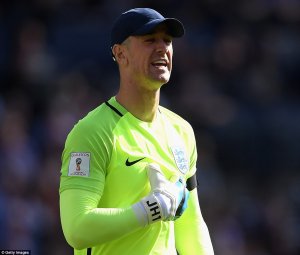 England and Scotland tied two all in Group F of the World Cup qualifying. The Daily Mail:” For six minutes, it was a genuine classic of the Auld Enemy genre. The 87 minutes which preceded that frantic finale, those three minutes from the end of normal time and those three minutes of added time, were anything but.

It was high on commitment but low on technique and, Alex Oxlade-Chamberlain apart, almost devoid of inspiration, but given what unfolded thereafter, given the sheer enormity of the drama this game managed to squeeze into its dying moments, you could forgive that.

When the story is told again down the generations, as it surely will be in Scotland for years to come, with heavy hearts full of regret, they will judiciously edit out what happened before. Only those last six minutes will make the cut.

That had everything: iconic goals to rival Archie Gemmill’s against Holland, a potential humiliation for England, and another desperate tale of what might have been for Scotland. It was the stuff of folklore. For a couple of minutes at least this stadium created a din to remind you why Hampden Park was once so feared by young English footballers. One hundred and forty seven years of footballing rivalry isn’t easily put aside. By the end you left convinced that the oldest game still matters.

To recap: with 87 minutes gone England, thanks to Oxlade-Chamberlain, were 1-0 up and frankly cruising to an uninspiring yet important victory. When Gary Cahill conceded a free kick some 25 yards from goal, Leigh Griffiths stepped up but it seemed ambitious, an exercise in hope.

He delivered a quite superb strike, over the England wall, swerving past Joe Hart, whose positioning looked suspect given that the ball was well inside the post. Still, Hampden cared not for such analysis. Honour at least had been salvaged and ecstatic celebration ensued.

From the restart, England conceded possession, Scotland advanced and won a free kick, wrongly awarded against Jake Livermore, in an identical position. Griffiths stepped up again.

This, though, seemed to push the boundaries of optimism to breaking point, yet, in the opposite corner, he repeated the trick, sending the ball through an England wall, which as least deigned to jump the second time, to send Hampden into a delirium perhaps not seen since 1985, when England were last defeated here. 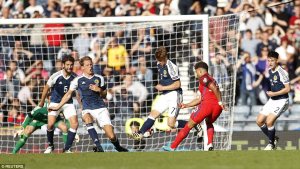 England had been close to a famous win; now they looked about to embrace abject failure, and yet, in added time, they were awarded their own free kick and Eric Dier forced Craig Gordon to scramble away desperately. 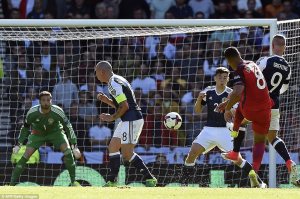 Hampden drew in breath in utter relief and then roared as Stuart Armstrong sprung away to attack. At that moment the fervour and decibels surely matched anything seen by the famous old Hampden Park, but it was a cruel deceit.

Armstrong, over-excited with just seconds to play, gave the ball away. England found Raheem Sterling. His cross was exquisite, and from close range captain Harry Kane, who had barely featured until then, volleyed its superbly past Gordon. It looked simple; it clearly wasn’t. It was an outstanding goal.

You suspect that never before has joy ballooned so rapidly and then been punctured so brutally. England cavorted like victors. Scotland, both team, fans and perhaps an entire nation beyond, looked utterly aghast, just as you might imagine anyone would if you witnessed a truly historic achievement slipping away.

For Gareth Southgate, it was potentially defining. Not in terms of World Cup qualification, which still looks safe enough, but in terms of the fragile English psyche.

‘I think it’s a huge moment for his team,’ he said. ‘The questions around us centre on character and the ability to withstand events that go against you, and we have to be a team that is never a beaten.

Maybe the clock runs out, but we never, ever stop. Today we’ve done that, and with a real quality finish under pressure to get the point. Is it what we wanted when we turned up here? No it isn’t. But the chain of events was remarkable.’

For Gordon Strachan and his team there was some pride; but overwhelmingly regret. ‘It’s probably one of the most emotional games I’ve ever managed,’ said Strachan.

‘You try to protect yourself from excitement, but it could have been my best result as manager. I’ve been lucky enough to have some good ones. One pass, one header, goes somewhere else, we would have won the game.’

The emotion defied analysis, but when the dust settles, Hart will be ruing those free kicks. He stands at a crossroads of his career. Which direction he will go is unclear but he knows Jack Butland stands ready.

For Marcus Rashford, it felt a game too far in an excellent season. The misplaced passes, the struggle to impose himself, led to an inevitable early exit. For his replacement, Alex Oxlade-Chamberlain there was a cameo performance of genuine quality and maturity.

On 70 minutes it was he alone who broke the drab deadlock, picking the ball up on the edge of the box, weaving across goal and unleashing a shot, which, though Gordon should have saved, was a triumph of opportunism.

Five minutes later he delivered a superb cross on to the head of Adam Lallana and the game should have been finished but the Liverpool man headed over.

Still, it looked as though England would survive: that Kane wouldn’t need to regret the skewed miss on 18 minutes, nor Dele Alli his misplaced pass for Rashford on 36 minutes.

Jake Livermore had hit the post on 50 minutes but this was hardly vintage stuff; and though Strachan referred to England as ‘giants’ and ‘heavyweights’ compared to his middleweights, they were laboured for long periods.

Scotland, for a match they needed to win, seemed curiously unambitious. That was until they unleashed the master-plan and that Leigh Griffiths finale. That was truly glorious; at least, it was while it lasted