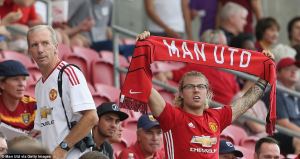 The Daily Mail:” Just for a moment, it looked as though Romelu Lukaku had wasted his chance. Henrikh Mkhitaryan played a wonderful cross into the path of Manchester United’s new £75million signing but his first touch let him down. Lukaku recovered, though, and took the ball around the goalkeeper before firing past a defender on the line. 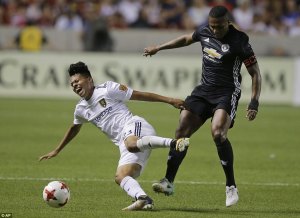 The Belgium striker will score more significant goals on more important occasions than this, a pre-season friendly in Salt Lake City. But this was his first in a United shirt and he will feel all the better for it.

Two days earlier in Los Angeles, Lukaku missed an easy chance as he was upstaged by young Marcus Rashford. His rather untidy effort here at the Rio Tinto Stadium was the difference between United and a surprisingly lively Real side.

They gave Jose Mourinho’s side more of a game than they might have expected. It made its mark on Juan Mata who limped off 14 minutes after coming on as a half-time substitute, and Antonio Valencia was then bizarrely sent off by MLS referee Allen Chapman. 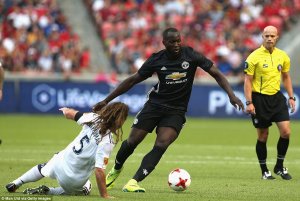 Otherwise, Mourinho will be happy with another decent run-out for his players and another win as United prepare to meet Manchester City in the International Champions Cup in Houston in the early hours of Friday morning.

A storm and 60mph winds an hour before kick-off threatened to disrupt United’s first ever game in Utah, but it had subsided by the time the players came out in humid conditions at just before 8pm local time.

Set against the mountains, the Rio Tinto Stadium is certainly a picturesque venue but there were more than a few empty seats visible in the 20,000-capacity arena, just as there had been in LA at the weekend with high ticket prices once again dampening the enthusiasm of US soccer fans.

If LA Galaxy had offered rather lame opposition, however, Real Salt Lake quickly demonstrated that they would offer more competition for a United side that began sluggishly in contrast to their flying start in the first game. Mourinho’s side were slow to the ball and wasteful in possession as they struggled with Real’s pace and movement.

You can’t blame all that on playing at high altitude, but in fairness the MLS team were able to go full throttle because coach Mike Petke had already decided to play three completely different teams for half an hour each.

Twice in the opening 20 minutes they sliced through the United defence and it needed excellent anticipation from Timothy Fosu-Mensah and Jesse Lingard to stop Jefferson Savarino and Joao Plata with last-ditch tackles in front of goal.

United’s starting goalkeeper Joel Pereira also managed to gather Plata’s low shot at the second attempt after another incisive move, but he was powerless to stop Real taking a deserved lead in the 23rd minute.

It came from another fantastic sweeping move as the lively Savarino raced in between Lingard and Daley Blind, and slipped a pass through for Luis Silva. Phil Jones looked as though he would stop the striker but was muscled off the ball far too easily by Silva who flicked it past Pereira with the outside of his left foot.

Up to that point, United had only put together one attack of note when Mkhitaryan swept the ball to Fosu-Mensah galloping down the right. Lukaku anticipated the defender’s low cross to the edge of the six-yard box but just couldn’t quite connect as he lunged in.

However, United did pull level in the 29th minute and it was their best player Mkhitaryan who finished it off. The Armenian was unmarked when he received the ball from Lingard on the edge of the area despite three white shirts being in close proximity, and he turned to drag a shot inside goalkeeper Nick Rimando’s left-hand post.

Real made their first raft of changes moments later and it seemed to take the edge off their play as Lukaku fired United in front with that landmark first goal seven minutes before half-time.

Mourinho summoned his own replacements at half-time, making 11 changes just as he did in LA at the weekend.

Unfortunately for Mata, he didn’t last long before limping off after picking up a foot injury in a challenge with Sebastian Saucedo, with the United boss anxious not to take any risks with the Spaniard.

There was certainly a little more bite in the game, and Valencia followed Mata down the tunnel in the 68th minute when he was sent off for taking retribution with a scything challenge on Saucedo.

It was a curious decision considering that the officials in both tour games have been reluctant to produce so much as a yellow card. Even more so because referee Chapman waited for more than two minutes while Saucedo received treatment before brandishing a red. The official asked Mourinho to take the Ecuador international off, a request which was refused, before sending him off.

Real briefly threatened an equaliser when Luke Mulholland flashed a shot wide in the 73rd minute, but United should have extended their lead in the latter stages as Chris Smalling and Anthony Martial missed chances. 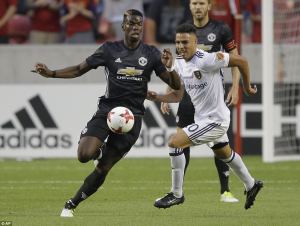