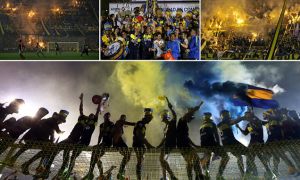 Boca Juniors won their 32nd league title. The Daily Mail:” Boca Juniors sealed the 32nd Argentine title of their illustrious history amid a spectacular display of colour and light at La Bombonera on Sunday evening.

Few places in world football carry a reputation for such passionate fans and the Boca faithful did not disappoint as they lit flares and unfurled huge banners to celebrate their team lifting the Primera Division trophy. 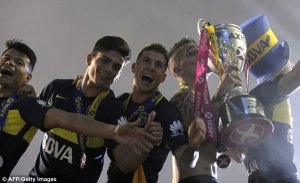 Players donned hats, lit their own yellow and blue flares and climbed the fences around the stadium to make sure the spectators got as close as possible. It created the spectacle one has come to expect from South American football.

Boca already knew they had won the title going into Sunday’s game against Union Santa Fe after closest challengers Banfield lost 1-0 at San Lorenzo last week to give them an unassailable lead.

That had sparked mass celebrations on the streets of Argentina’s capital but it appears the fans saved the very best for their final fixture.

Boca players did their best to give the fans something else to cheer about, endeavouring to beat the struggling Union despite having already achieved their ultimate goal.

The 2-1 win, sealed by a brace from Dario Benedetto, was a scrappy affair, but few will remember the game itself with the title celebrations very much the main event of the evening.

Boca finished the season seven points clear of their arch-rivals River Plate, who themselves find their record of 36 league titles coming under threat. Indeed, Boca have won two of the last three national titles and are now just four behind on 32.

Head coach Guillermo Barros Schelotto was keen to thank their fans for inspiring his players towards the championship in what was his first season in charge.

He told TYC Sport: ‘The fans were always on our side and it is a joy to give them the championship.’ 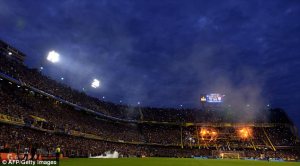