Chelsea took apart my guys from Arsenal 3-0 in a preseason romp in China.

The Daily Mail:” Michy Batshuayi did his best to convince Antonio Conte that he need not be quite so desperate to sign another striker, with a fine performance on Chelsea’s opening match of their pre-season Asian tour in Beijing.

It may not quite have been intense as the FA Cup final two months ago, nor even as significant as the Community Shield in two weeks time, but Chelsea at least got back on track in terms of dominating Arsenal.

And the Belgian striker did all he could to try to convince Conte, who has just signed Alvaro Morata for £70m and wants to bring Fernando Llorente to the club, that he ought to be part of his plans for the season.

Two superb strikes and an assist marked out Batshuayi as the chief beneficiary on this muggy evening in Beijing on a pitch which looked ragged and hard to play on. Arsenal certainly learned little, other than that they will need to improve considerably for their date at Wembley next month. 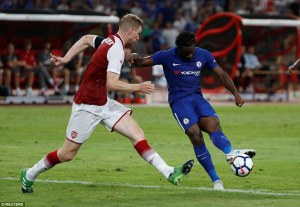 With three games already under their belt on tour, the FA Cup holders looked remarkably lackadaisical, compared to Chelsea, who on their tour opener looked well ahead of their Community Shield opponents in terms of conditioning.

The Olympic Stadium pitch was kicking up sods of earth almost as soon as the match started and hardly helped. Indeed, the quality early on was intermittent but that which there was generally came from Chelsea. A sleepy Ainsley Maitland-Niles dawdled on the ball eight minutes in, allowing Willian a chance clean through on goal, which he pulled wide.

And though Aaron Ramsey went close from a Mesut Ozil cross on 25 minutes, it was rare moment of danger as Chelsea imposed themselves on their opponents. David Ospina, in goal for Petr Cech, still feeling the effects of food poisoning, was forced into a fine double save on 35 minutes, first parrying a Willian strike and then tipping over from Victor Moses’ effort directly from the rebound.

Michy Batshuayi had the ball in the net a minute later , though was ruled out for offside, but no matter: it was to prove an evening when the Belgian, whose goal won Chelsea the title at West Brom last season, would shine.

t was him on 42 minutes who set Willian on his way, cutting inside the fragile Arsenal defence to strike the ball around Ospina and into the far corner to open the scoring. Just one minute later it was Batshuayi himself on the score-sheet, with an excellent strike. N’Golo Kante found him in the box and Batshuayi controlled, turned and curled the ball past Ospina into the top corner to double the lead. 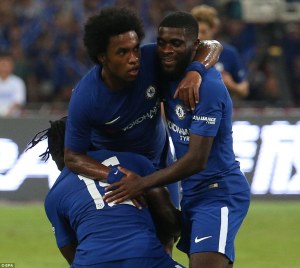 Arsenal attempted to inject some energy at half time by bringing on six substitutes – Danny Welbeck, Laurent Koscielny, Mohammed Elneny, Sead Kolasinac, Francis Coquelin and Olivier Giroud – but to little initial effect. In fact, just three minutes into the half, Cesc Fabregas found Marcos Alonso, who dashed down the left before pulling back to Batshuayi, who, from the edge of the box, connected with an excellent dipping, spinning strike which bamboozled Opsina and made it 3-0.

Even when the game degenerated into a frenzy of substitutions, Chelsea’s reserves still looked better than Arsenal with Fikayo Tomori impressing, going close on 56 minutes. Arsenal chief moment of significance in the second half came when David Luiz looked to have tripped Wellbeck inside the box, but the referee awarded a free kick, which Giroud drove into the wall.