Arsenal defeated Chelsea 4-1 in a PK shootout to win the Community Shield.

The Daily Mail:” As Arsenal waited to collect the Community Shield at Wembley, Antonio Conte wandered about, arms folded and head down, with the look of a very bemused man.

How did his team lose his game? Why did his goalkeeper take his team’s second penalty in the shoot-out? How did his expensive and shiny new striker miss the target completely from 12 yards? And just what is an ABBA shoot-out anyway?

As Conte pondered all this and doubtless much more, Arsenal collected the season’s first piece of silverware. Arsene Wenger’s team came from behind to draw and then won the strange penalty competition that followed by four goals to one. It wasn’t the fact that Chelsea lost the shoot-out that really mattered, it was the manner in which they lost it.

The ABBA system is new and will take some getting used to. The best way to explain it is that it works like a tennis tie-break. One shot to team A, followed by two for team B, two for A and so on. The idea is to prevent the team going second having to deal with the pressure of always trailing.

At times here the players didn’t look totally convinced about who’s turn it was, players on occasion being tentatively shoved forwards like nervous teenagers inching towards a youth club dance floor, but that still didn’t excuse the peculiar way that Conte and his players went about the business of trying to win it. 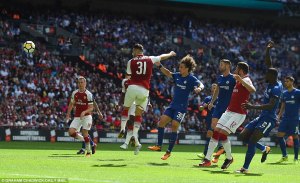 Bizarrely, Thibaut Courtois took Chelsea’s second kick and ballooned it over the bar. On the touchline, Conte closed his eyes. When he opened them again, he saw centre forward Alvaro Morata drag the first meaningful goal attempt of his Chelsea career miserably wide with his right foot.

So when Alex Oxlade-Chamberlain and Olivier Giroud stepped up to score for Arsenal, the whole thing was over and Conte was left with questions to answer.

Having spent much of the summer with doubts swirling over his long-term future with the Premier League champions, none of what happened at Wembley yesterday will have helped.

His team contained not a single new signing – Morata began on the bench – and maybe that was deliberate. By fielding an eleven almost identical to the one that finished last May’s FA Cup Final defeat to Arsenal at the same stadium, maybe this was Conte’s way of underlining his recent assertion that his squad lacks depth.

Whatever the case, the shoot-out just looked chaotic. As Courtois hurried to take his kick, it almost looked as though Chelsea didn’t really care. That impression only deepened when the Belgian all but lashed the ball out of the stadium.

Conte and his team did care, of course, and you only had to observe Morata afterwards – standing disconsolately with his water bottle – to know that, but Conte’s Chelsea has not always appeared a terribly settled place during the weeks of summer and nothing that happened yesterday changed that.

For a while during the actual game, Chelsea had exerted a semblance of control. Indeed, had the Spaniard Pedro not been sent off with eight minutes to go they probably would have held on to their lead to win. When things are not quite right at a football club, weird things to happen on the field and that was the case here.

Arsenal were the better side early on and looked dangerous. Their own big summer signing, Alexandre Lacazette, was in the team and he almost scored in the 22nd minute, curling a measured right foot shot against the post from 13 yards. Another forward, young Alex Iwobi, was lively, too, and for 25 minutes it was an uncomfortable afternoon for the English champions. 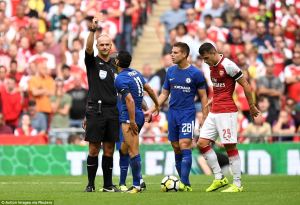 Chelsea grew in to the game as the first half wore on and had established themselves as the more assertive team by the time they took the lead in the first minute of the second period.

It was a poor goal for Arsenal to concede as they failed to clear a corner properly but Victor Moses exhibited fine timing and technique to control and score from eight yards. The player sent off in last season’s FA Cup Final will have relished the opportunity to emerge as the match winner here. 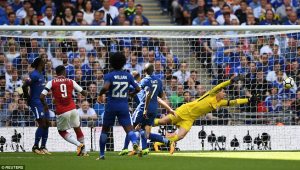 It could have happened, too. Arsenal did improve and Courtois had to save well from Mohamed Elneny and Granit Xhaka to preserve Chelsea’s lead. But the threat from Wenger’s side seemed to have passed when Pedro slid in to rake Elneny’s Achilles with eight minutes left.

It was a daft and dangerous tackle and, though most in the stadium expected to see a yellow card from referee Bobby Madeley, replays suggested that the red was at the very least understandable.

On the touchline Conte looked peeved and 30 seconds later he had real reason to be as Bosnian defender Sead Kolasinac – on for injured Arsenal captain Per Mertesacker – beat a clumsy Chelsea offside trap to head Xhaka’s free-kick in to the corner on his competitive English debut.

Subsequently Walcott could have won it for Arsenal, breaking clear only to be denied by a lunging block from Cahill. With hindsight, Conte may wish the whole thing had ended there.