Jose Mourinho told Paul Scholes to shove it where the sun doesn’t shine accord to Andy Hunter at the Guardian.

Hunter wrote:” José Mourinho vented his anger on Paul Scholes in the wake of Manchester United’s 2-0 win at Everton, accusing the club’s former midfielder of being jealous of Paul Pogba’s wealth and of failing as a pundit.

United produced a dominant second-half display at Goodison Park to record their first victory in five matches thanks to superb goals from Anthony Martial and Jesse Lingard. The visitors were inspired by Pogba, who was heavily criticised by Scholes following Saturday’s goalless draw at home to Southampton, and Mourinho took the opportunity to return fire. He claimed several former United players turned pundits were driven in their criticism by an unfulfilled desire to have a job back at Old Trafford. And he reserved his fiercest condemnation for Scholes.

“Maybe I will be lucky this time and the kings of rock and roll who said I was under-performing last match will now say I’m performing,” the United manager said.

Turning specifically to Scholes’ criticism of Pogba, Mourinho added: “I think the only thing Paul Scholes does is criticise. I don’t think he comments, I think he criticises, which is a different thing. Not every one of us has to be phenomenal like he was as a player. That does not mean we all have to be phenomenal. 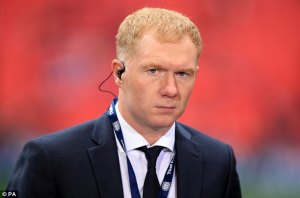 “Paul [Pogba] tries to do his best all the time. Sometimes he plays very well, sometimes he plays well, sometimes he doesn’t play so well. It’s not Paul’s fault that he has made much more money than Paul Scholes. It’s not Paul Scholes’ fault either, it’s just the way football is. I think Scholes will be in history as a phenomenal player, not as a pundit. I prefer to look at him as a phenomenal player that gave so much to the club that I am proud to represent.

“If Paul one day decides to be a manager, I wish that he can be 25% as successful as myself. 50% of that is 12.5 silverware, 25% is around 6. If he’s 25%, he’ll be quite happy. In my mind Paul Scholes is a phenomenal player, one of the best I’ve ever seen playing in midfield. He gave so much to my club that I can only thank him for that. The prestige of this club is based on people like him.”