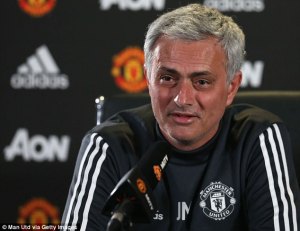 Jose Mourinho admits Man U can’t buy their way to the title according to the Guardians Andy Hunter.

Hunter wrote:” José Mourinho does not believe there is any point in Manchester United throwing money around this month in an effort to reinvigorate the title race – because Manchester City are too far ahead.

The United manager was careful not to rule out a possible move for Alexis Sánchez – he said an exception to the club’s normal policy of strengthening in summer could be made if an outstanding player became available – but he insists it is too late for anyone to buy their way into the title race this season.

“At this stage, I don’t think it’s about the market,” Mourinho said. “There are lots of already strong teams in the Premier League, not like in other leagues where it is difficult for the top sides to lose points, and there is a very important difference of points between first and second. City have a very comfortable advantage and they can sit on that; it is the sort of lead that gives a lot of tranquillity and takes away the pressure from the guy that comes behind you. I have been in that situation.

“I don’t think any of the teams near the top – Chelsea, Liverpool, Tottenham and ourselves – are thinking they can spend money this January to close the gap. It’s not about transfers. It’s about keeping on winning, getting the maximum number of points from the remaining games and seeing what happens.”

United are understood to be willing to top City’s offer of £20m for Sánchez, out of contract at Arsenal at the end of the season, though Pep Guardiola may no longer be quite as determined to sign an extra striker with the news that Gabriel Jesus could be back by the end of the month. United prefer to do business in summer and, if Sánchez does end up at Old Trafford in this window, it will only mean there is no need to strengthen the front end of the team in six months.

“Normally, we try to improve our squads each summer by trying to make every department stronger,” Mourinho explained. “We might have three targets – a defender, a midfielder and an attacking player – but if you sign one in winter you don’t need to do the same thing again in summer, so we would only go for two players. If we do something now it has to be right for the team. If it happens it happens, but if it doesn’t happen I am still happy with my squad and I like my players.”

That would seem to include Henrikh Mkhitaryan, who has not found it easy to hold down a first-team place at United and was thought to be being manoeuvred towards the exit door until Mourinho suggested he would be a likely starter against Stoke on Monday evening.

“Every player has a price, no one is untouchable, and when the transfer window is open it is open for any club who is interested in any of our players,” he said. “Then it’s up to us to decide yes or no.

“But Henrikh is a very good player, he played in our last game and, assuming he trains normally at the weekend, he will be selected to play on Monday.”