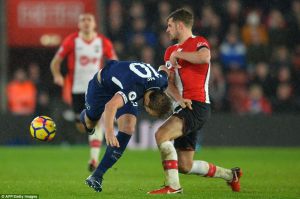 Tottenham  had a chance to cement their hold on fifth place and keep within striking distance of second place Man U, third placed Chelsea however Southampton had other ideas as the Saints held spurs to a one all draw.

Spurs had the opportunity to keep their five-point lead over sixth place Arsenal. Now the gap is only a mere three points. Tottenham is fifth 45 points while my Gunners are sixth with 42 points. 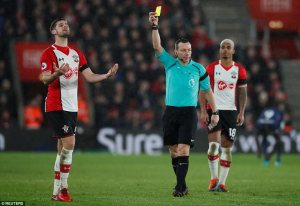 The Guardians Jacob Steinberg wrote:” For Southampton, nothing was more satisfying than the sight of an animated Mauricio Pochettino hopping up and down on the touchline as Tottenham’s final attack petered out. It is almost five years since they brought Pochettino to England and there is plenty of evidence to suggest that they have lost their way since the days when they were seen as the model for every mid-table hopeful to follow. But this gutsy performance reminded them of better times, offering them hope of winning their battle against relegation, and they must have taken great heart from seeing their former manager displaying his frustration so visibly at the end of this absorbing game.

A draw was not enough for Southampton to move out of the bottom three but this was a step in the right direction after weeks of gloom and speculation about Mauricio Pellegrino’s future. Sharing the points with Tottenham is not to be sniffed at. The only disappointment for Southampton was that they were denied their first victory in 11 games by Harry Kane’s 99th Premier League goal.

While Pellegrino’s default response to questions about his diminished job security has been to point out that he is trying to lay the foundations for a brighter future, his team’s early vigour gave the impression the Argentinian is under no illusions about the rising culture of impatience in the Premier League’s packed lower reaches. Marco Silva’s sacking by Watford earlier in the day was a reminder of the seemingly insatiable desire for instant success and Pellegrino, who has struggled to win the trust of Southampton’s supporters, must have been 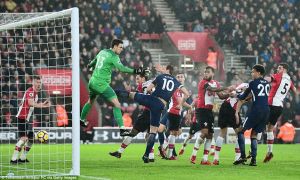 The hosts were quick to the ball in midfield and eager to probe down the flanks, displaying an intent that has not always been evident in their approach this season, and they certainly gave their all to make life difficult for Tottenham during the first half. The match was barely a minute old when Manolo Gabbiadini tested Michel Vorm, who was making his first league start of the season, with a shot from 25 yards and it was impossible to argue that it was against the run of play when Southampton took the lead.

Perhaps the absence of Hugo Lloris in goal unsettled Tottenham’s defence. Lloris and Christian Eriksen were both missing because of illness and the visitors often looked uneasy without two of their most influential players, falling behind to a goal that summed up their ragged start.

Southampton had clearly noticed that Serge Aurier can be guilty of questionable positioning. The Ivorian is an enterprising attacking force from right-back and his pace can get him out of tight spots but he was nowhere to be seen when Pierre-Emile Højbjerg almost set up Gabbiadini for a simple finish and he did not do enough to stop Ryan Bertrand from zipping a low cross across the slick surface in the 15th minute. Gabbiadini was lurking again and the Italian’s presence forced Davinson Sánchez to slide and turn Bertrand’s centre past Vorm.

However, Southampton’s attempt to protect their advantage left much to be desired. Tottenham sought an instant response, with Eric Dier rapping a snapshot against the woodwork, and they were level when Kane peeled away from Jack Stephens to head Ben Davies’s corner past Alex McCarthy three minutes later.

The thought occurred that Virgil van Dijk would have had a tighter grip on Kane. There was no stopping Kane once he had a yard on Stephens, though, and the sheer force of will that he displayed to meet Davies’s delivery first underlined why reports of Real Madrid targeting the striker in the summer were dismissed so vociferously by Tottenham. 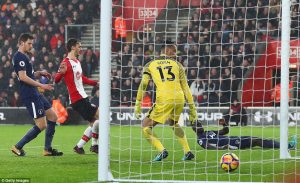 Yet while Kane’s importance to his team cannot be emphasised enough, this was a reminder that Tottenham are not a solo operation. Moussa Sissoko turned Davies’s driven cross past the post and they controlled the game after the break, but they missed Eriksen’s craft. Dele Alli, who clipped a shot wide in the second half, struggled to shoulder the creative burden. Cédric Soares’s diligent performance at right-back can best be summed up by Pochettino replacing Son Heung-min with Érik Lamela and Tottenham often huffed and puffed in their quest for a winning goal.

With Mario Lemina impressing in midfield, there were few heart-in-mouth moments for Southampton to endure. Stephens made a last-ditch block to deny Lamela and Alli was inches away from converting Kane’s low centre from the left, but Southampton could point to what could have been a memorable introduction to senior football for Michael Obafemi, a 17-year-old striker who fluffed his lines when the impressive Dusan Tadic teed him up.