England scored first off, a sublime free kick from Kieran Trippier in the 5th minute. However, Croatia came back to score two goals to break England’s hearts to win 2-1 in extra time to advance to the finals against France.

Ivan Perisic leveled this puppy in the 68th minute with a toe poke off a ball that found the back of the net to make it one all.

The heart break came in the 109th minute.  Mario Mandzukic flat out beat the keeper and the entire England defense for the pulsating 2-1 win.

The match became a little chippie in the end however Croatia proved they were slightly superior to England.

Three Lions gave it all they had.

No one expected England nor Croatia to make it the semifinals. Sure, the young lions lost in the semifinals however this World Cup is a success for the guys.

No one expect England to make it this far.

Harry Kane stepped up to the plate and he is now on the way to becoming a world class player.

England will take on Belgium in the third-place match on Saturday.

The Daily Mail:” One lapse. That is all it takes in this rarest of atmospheres. Kieran Trippier lost his header to Ivan Perisic, Mario Mandzukic ran off John Stones, and England were out of the World Cup.

It took Croatia 109 minutes of football to take the lead against England, but they edged it in the end. They were the better team in the second-half, they hit the post, Jordan Pickford made one magnificent save.

But let’s get one thing straight. England were not lucky to be here. They were not fortunate beneficiaries of a soft draw, or undeserving contenders for the 2018 World Cup. They were, in many ways, the best team here. Not in football terms, or technical terms. No-one is claiming them the match for France, or even Croatia, the finalists. But as a team, a band of brothers, a group of players amounting to more than the sum of their parts, England were outstanding.

There is no shame here, no failure. England did as well as could possibly be expected given their youth, inexperience and the absence of a playmaker in the class of Luka Modric.

Gareth Southgate, the manager, has done an exceptional job and the national team should be his to mould for another four years at least. He deserves that, and so do they, his loyal lieutenants.

Anyone who thinks England just got lucky, doesn’t know football. This game was the proof of it. They battled Croatia to a standstill, both teams exhausted, all energy and emotion spent.

They could not have given more, either of them and that a single goal separated them is fitting. Better that than to lose of penalties and see that hoodoo return. That is another curse that has been lifted at this World Cup.

Credit Croatia, too. This was a spirited performance after two knockout games that have reached penalties. When England took the lead after five minutes, and dominated the opening 30, it would have been easy to be overwhelmed.

Instead, they found a way back into the game, through Modric and man of the match Perisic, outstanding technical talents that point the way forward for Southgate and his men. But they know that, having come so close. They know there is a missing link, and the next step is finding it. Easier said than done.

Croatia were always going to be the strongest test England had faced in this competition to here, and so it proved. If England had the upper hand for the bulk of the first-half, the second – in its entirety – belonged to Croatia. This was the team England – the country, more than the team – feared.

Controlling the ball in midfield through Luka Modric, with Ivan Perisic quite brilliant coming in from the left. England looked ragged through that second 45 minutes, leggy, edgy, panicked. 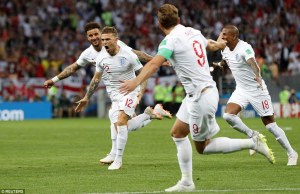 In a seven minute spell, Croatia took them apart, physically and technically. Poor Kyle Walker was struck a devastating blow in the crotch from a shot by Perisic, collapsed, and when the ball did not go out of play, got up to clear the recycled cross. Then he fell again. It was a heroic moment. Whether it played a part in what happened next is hard to say.

Just three minutes later Sime Vrsaljko hit a superb deep cross from the right, and Perisic drifted off Kieran Tripper and attacked the ball. Walker went for a diving headed clearance but Perisic nipped in first and met it with a volleyed flick past Jordan Pickford.

A high boot? Possibly, but Walker was stooping, so it was a judgement call. Referee Cuneyt Cakir went with the scorer. To be fair we would have moaned like hell had he disallowed one of ours like that.

The pressure was now unrelenting. Perisic capitalised on the growing uncertainty in England’s back line and hit the far post with a shot, Ante Rebic putting a tame rebound into the arms of Pickford. This was as rattled as England had looked all tournament. Pickford came for a high ball, didn’t get it, and Perisic shot over, the goal unguarded.

And yet there were moments when England’s strengths surfaced once more. Substitute Marcus Rashford won a free-kick, which Trippier curled in only for Harry Kane to steer a free header wide. The glorious fifth minute seemed an age away as the game moved into extra-time.

It is a very select group, those that have scored for England direct from free-kicks. Even more exclusive, the little club that have done it at a World Cup. It’s David Beckham, actually. Just him. One against Colombia, most recently against Ecuador in 2006. Still if he does ever decide to form an England World Cup Free-Kick Scorers Society at least he’ll have company at their annual ball. He’ll have Kieran Trippier after Wednesday night.

Just five minutes gone, first real attack of the game. What a start it was for Trippier and England. There can be little doubt now that we are watching the best deliverer of a dead ball this country has had since Beckham. We’ve already seen his first-time crosses, his vicious perfectly flighted corners, but he has never scored a free-kick for England. No time like the present then. No time like a World Cup semi-final.

It began when Dele Alli was fouled by Luka Modric just inside the penalty area D. England had been on red alert for Modric and what he could do, so it was ironic that Croatia were suffering with the pace and movement of England’s forward midfield instead. A trio of England players stood around the ball deliberating, but the suspicion always was that it would be Trippier’s responsibility at this range.

He did not disappoint. The whole Croatia wall jumped but somehow the Tottenham man got it up, over and down to leave Danijel Subasic grasping at thin air in Croatia’s goal. The ball passed over Dejan Lovren’s head en route. Not small, Lovren. It was a quite exquisite free-kick. Beckham would have been proud of it. So, for that matter, would Cristiano Ronaldo – or Roberto Carlos.

n the bench, Gareth Southgate pumped his fists and then returned to default concentration mode. Five minutes is desperately early to take the lead in a World Cup semi-final. Better than going behind after five, obviously. But it’s an age to defend that lead – and, as against Tunisia when this campaign began, England squandered several chances to take the pressure off.

In the 14th minute, a Trippier corner was met by Harry Maguire – when are they not? – and he steered his header low towards the far post. A touch from a lurker and England would have been two ahead but no-one was there. Maybe England are so used to scoring headers direct from these dead balls, they aren’t following in.

Then the chance that amazed and frustrated in equal measure. Frustrated because it was a genuinely good chance missed by England; amazed because it was Harry Kane who fluffed it. The pass from Jesse Lingard was perfect and suddenly Kane was clear. Free of Croatia’s defence only Subasic to beat.

He tried to slot it past him and the whole stadium expected to see the ball come to rest in the goal, but no. Subasic saved and Kane scrambled desperately to be first to the rebound, now at an acute angle. He tried to whip it in, but the ball hit the near post, came out, struck Subasic and spun up in the air across goal and out on the other side. The second chance was tough. But the first? In Kane’s world that was a sitter.

Six minutes later, England could have scored again. Alli, enjoying his best game of the tournament, the provider, finding Lingard whose attempt to pass it into the net from the edge of the area was ambitious and travelled the wrong side of the post.

But this was still a huge performance from England, with Lovren struggling to contain Raheem Sterling in particular. It was clearly the plan to use his pace in running races against Croatia’s back line, and it worked. With Alli and Lingard skipping around in his orbit, England looked dangerous.

Of course, when Modric got on the ball so did Croatia, and the 10 minutes before half-time he controlled. It didn’t add up to much, though – an Ante Rebic shot comfortably saved by Jordan Pickford, and a few important interceptions by Ashley Young and John Stones. In the 19th minute, a crossfield pass by Modric picked out Ivan Perisic, whose low shot went just wide, but England’s chances were better, and clearer. Not that this stopped the jangling nerves, mind you. But it is hard to imagine what would, at this late stage. 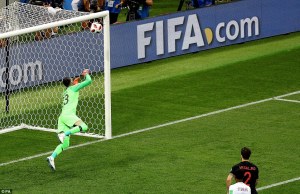