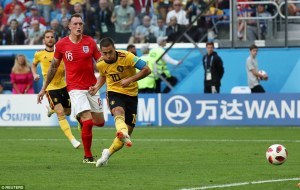 Belgium was too strong for England. Belgium started out quick with a masterful goal by Thomas Meunier in the 4th minute to take the one nil lead.

This sent the English side on their heels. 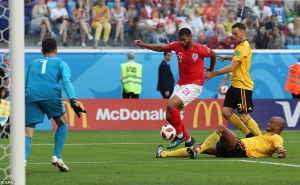 Three Lions attacked in the second half. Belgium swatted away attack after attack until the match was salted away on a brilliant counter attack goal from Eden Hazard in the 82nd minute winning in a cake walk 2-0.

England put up a fight however Belgium was a superior side.

It was a good tournament for Three Lions. However, England needs to shore up the midfield and work on putting the rock into the back of the net.

England had several great chances to even this puppy up however the guys missed by that much. This is what separates winning and losing.

In the end, Belgium was just too good.

The Guardians Dominic Fifield:” There was a collective puffing of cheeks offered up by England’s players at the final whistle, victims of Belgium’s best World Cup showing, but that sense of disappointment will pass quickly enough. Gareth Southgate’s young and talented squad did themselves proud over this tournament. No other English team has ever bettered the fourth place they have claimed, unexpectedly and joyously, on foreign soil and their achievements are to be celebrated. 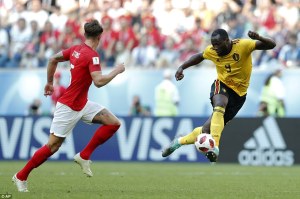 The real frustration had been endured in the Luzhniki Stadium in midweek. This afterthought in St Petersburg, a game played amid Mexican waves and those familiar chants of “Rossiya”, should not tint anything that came before. Southgate will actually have been encouraged by the upbeat tempo his side whipped up after the interval, when weary legs and tired minds might have reduced the whole contest to a plod, and threatened for a while to force parity. Chances were created, opportunities were missed. Then Eden Hazard, stirred into action and fed by the irrepressible Kevin De Bruyne, danced down-field and settled the occasion.

Some will no doubt argue that England have still to prosper against top quality opposition in competitive action, if, indeed, that is what this was. Belgium have beaten them twice in this tournament and will be received by the crowds in Brussels on Sunday rejoicing in their best ever performance at the World Cup. Their celebrations at the end, from bench to pitch, reflected a sense of achievement. But, as Southgate had pointed out in the build-up, England never expected to be here. “I’m not sure anyone in our country thought we’d be playing seven matches,” he had offered.

They ended up competing well here, despite a slack opening which left them chasing the game almost from the outset. England’s second half showing demonstrated all the pride and commitment for which Southgate had called. They were the dominant team after the interval, even if Belgium retained a considerable threat on the break, as demonstrated eight minutes from time by Hazard’s smart finish inside Jordan Pickford’s post. Yet headers at set-plays would drift wide, and Toby Alderweireld would hook Eric Dier’s clipped finish from the line. The stubborn refusal to wilt, despite having shipping a goal with the game in its infancy, was still admirable and said so much about the spirit of this collective. 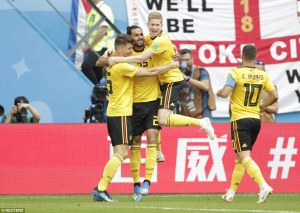 The introduction of Jesse Lingard and Marcus Rashford at half-time had clearly made an impact, but to see the group straining to respond despite weary legs and tired minds was still impressive. There was actually plenty to admire: from Fabian Delph’s versatility and fine challenge to thwart Thomas Meunier; to Kieran Trippier’s delivery which so stretched even this experienced opposing back-line at times; the substitutes’ zest and a far more impressive showing from Ruben Loftus-Cheek; and Eric Dier’s increased influence in midfield. It had been the Tottenham Hotspur midfielder, one of five changes from the semi-final, who exchanged passes with Rashford midway through the second half to advance on Thibaut Courtois at an angle. His shot was clipped smartly over the goalkeeper, only for Alderweireld to slide in and scramble the effort from under the crossbar.

England’s players massed in front of their supporters after the final whistle, serenaded to the heavens for their efforts, while Belgium prepared to mount the stage to claim their bronze medals. Theirs had been the bite, their ambitions made clear by the reality the wing-backs had combined to force them ahead while the game was still settling into its rhythm. That reward had stemmed from a Courtois clearance, nodded down by Nacer Chadli for Romelu Lukaku to accept and exploit the gaps in a rejigged England midfield. His pass inside Trippier for the galloping Chadli to collect was still superbly weighted, with the West Bromwich Albion player – who would depart before the break with hamstring trouble – squaring across the six-yard box. There appeared Meunier, sprinting in ahead of a startled Danny Rose, to convert beyond Pickford.

The Everton goalkeeper would do well to paw away De Bruyne’s deflected effort, and thrillingly from Meunier’s late volley after a counter-attack crammed with back-heels and precise passing which left England gasping in the vapour trail. Twice the Manchester City playmaker split England’s back-line with subtle and perfectly weighted passes only for Lukaku’s heavy touch to kibosh the chance. The striker, four times a scorer in Russia, was substituted on the hour-mark and strode off straight down the tunnel, and was even absent in the post-match huddle out on the pitch.

His chances of claiming the golden boot had died here, with that honour surely now Harry Kane’s to celebrate, unless Kylian Mbappe or Antoine Griezmann runs riot in the final. The England captain only really had one sight of goal here, after the excellent John Stones clipped over a fine pass for Raheem Sterling, who squared neatly across the penalty area. Kane has looked as fatigued as anyone of late, and his standing duly leg gave way as he struck his shot. The effort veered wide of Courtois’s post. 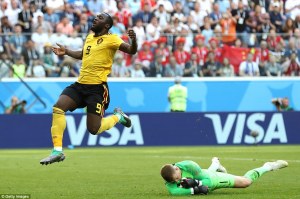 Those misses left England watching the post-game ceremony from the fringes, but they have not been peripheral to this tournament. And it has been a while since the nation has had that to celebrate. Southgate and his players can look back with pride.