Liverpool dropped a 3-1 decision to Borussia Dortmund in a preseason hook up.

The Daily Mail:” Joel Matip has handed Jurgen Klopp a major fitness headache as he suffered an injury which may force him to miss the start of the new season.

The Cameroon defender walked off the pitch during Liverpool’s 3-1 defeat to Borussia Dortmund clutching his left groin after he had attempted to make a simple pass in the 22nd minute. He received treatment in the dressing room and was able to leave the stadium without the use of crutches. 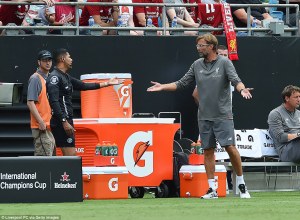 But Klopp revealed the 26-year-old – who was ruled out of the Champions League final after damaging his thigh on March 31 at Crystal Palace – had suffered a ‘small tear’ and the full extent of the issue will only become apparent when he is assessed again later this week.

‘It is not the same injury,’ said Klopp. ‘It’s a little tear, we hope. That is the most negative thing about this day. It is not cool.

‘These things can happen. Maybe we know tomorrow or the day after tomorrow we know more. At this moment we only know it was too painful to carry on.’

This is a problem for Klopp, as he had Matip lined up to partner Virgil van Dijk in the Premier League opener against West Ham on August 12, as Dejan Lovren is not due back from his post-World Cup holiday until August 6.

At that stage, it was difficult to see how Klopp’s current side – who wore a garish purple kit – would lose to his old employers.

The Germans, though, equalised with a 63rd-minute penalty from Christian Pulisic; the United States international was tripped by James Milner but got up to beat Loris Karius from 12 yards.

The match seemed to be drifting towards a penalty shootout, but in the 88th minute Dortmund broke away and Pulisic – a player whom Klopp tried to sign for Liverpool 12 months ago – thrashed in a shot from 20 yards after he was teed up by Marcel Schmelzer.

To make matters worse, Karius then pushed a Pulisic shot into the path of Jacob Brunn Larsen who fired into an empty net. It was, without question, another error by a player who needs to be removed from the spotlight.

‘The game was very difficult for both teams,’ said Klopp. ‘A few players after five minutes thought “wow, where are we here?” Dortmund had exactly the same problems. Fabinho should be the guy who organised in the first-half but it was not easy.

‘We controlled the game but didn’t create a lot of chances. We scored a goal after a nice set-piece. Set-pieces were the most positive thing today. Second half was much better. We won a lot of balls in second half but didn’t do much with it.

‘We had two big chances from Dom Solanke and Joe Gomez had a big, big chance with Sheyi Ojo (who hit the bar). Days like this you have to stay strong and show desire and greed that you want to keep the result at 1-1. Morale went down at 3-1. You have to learn from it.’

Karius’ performance showed why Klopp has broken the world transfer record to sign Alisson, who will join Liverpool’s squad for a training camp in France next week and make his debut against Napoli in Dublin on August 4. 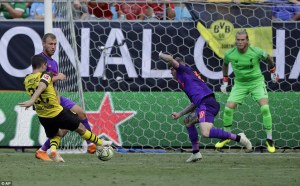